Here's an example of 'failing upwards' - a surprising method for achieving success that I describe in my latest book, Success...Or Your Money Back.

Recently, I was incredibly excited to read about the newly launched Y-Combinator Fellowship programme for promising new tech startups. I'd previously applied to the 'main' Y-Combinator programme and been rejected four times over a period of two years, so I jumped at the chance to have another opportunity to work with (and learn from) some of the very brightest minds in Silicon Valley. It seemed that I wasn't alone in this desire and that many other startups were also chomping at the bit to be taken on by YC in any way. Despite The YC Fellowship being launched only five days before applications closed, it garnered over six and a half thousand applications (see the email below that they sent me). It seems the 'Tech Gold Rush' is still alive and well - and lots of folks are clamouring to stake a claim: 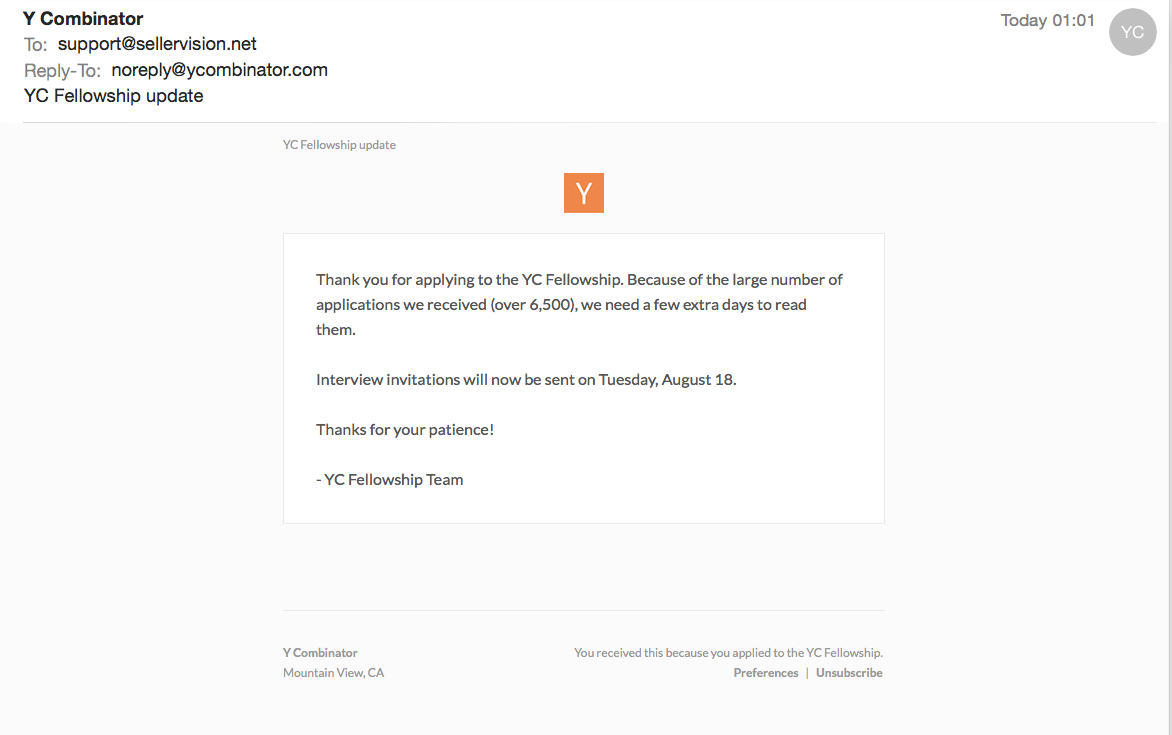 A few days later, I wasn't totally surprised (but still really gutted) when I received another email informing me that my startup hadn't even landed an interview for the YC Fellowship (they asked just 32 companies in the end). I've encountered SO many rejections over the years, and they're part of my life, because I'm always trying to create something original, exciting and engaging. Each rejection still hurts like a severe kick in the stomach. But, to succeed, you can't let that horrible ache stop you continuing. After a day of being utterly down, you have to train yourself to 'get back on the horse' and forge ahead. One definition of madness is 'doing the same thing over and over and expecting different results'. So, I decided I needed an alternative strategy to get noticed by the top brass of Y Combinator.

To promote the app I've built over the last year, SELLERVISION I created a video that pays homage to Princess Leia's famous hologram message in Star Wars, in order to catch the attention of the Y-Combinator bosses, Sam Altman, Paul Graham and Jessica Livingston. I'm not sure if the video will ever reach them - or if it does, if they'll care, but I'm hoping that, even if they don't care, possibly in the process a bunch of users might view my video and download SELLERVISION - or perhaps some other Internet pioneers like Ashton Kutcher or Sean Parker may notice what I'm doing and ask me for a meeting, or even all of these scenarios might come to pass - well it's good to have lofty goals! Anyway, I'm hoping that maybe some folks in Silicon Valley will drop me a line and help me make this idea the huge success it deserves to be...

You can view the 'Help me Paul Graham...you're my only hope' video below and read the Press Release for Sellervision too:

NOTE: this isn't the first time I've used a creative way of getting the attention of top decision makers. In my first book, Ideas Man, I describe how I landed my first job in Television (that over two and half thousand people applied for) by sending the Boss of the company a pizza with a laminated ransom note style message stuck to the underside of the pizza box that said 'I wanted to give you a pizza my mind..." (yes, as cheesy as the pizza) - and how after that, I wrote to his favourite actor on his favourite soap, 'Coronation Street', asked the actor to send me a signed photo and then sent it to the Boss with a message on the photo that said: 'Hire Shed, He's right up your Street'. Both 'stunts' were a bit twee, but they got the Boss's attention enough to allow me to then back up these attention-grabbing creations with concrete evidence I could do the job. When the Boss and his Team noticed me, they asked me in for an interview. I took in script ideas and format concepts. I got the job and stayed for six years.

UPDATE 1: Whilst my video was being digitally enhanced for the Star Wars Princess Leia hologram effect, I read this article by Paul Graham on domain names: http://www.paulgraham.com/name.html - where he espouses the utter need for a .com domain for your startup. So, this sent me into a further challenge to secure the domain sellervision.com which was at the time being used by a German IT company (see below). Fortunately I  made contact with the boss of the company, a fantastic guy called Dietmar who spoke superb English. We quickly hammered out a deal that was good for both of us and I bought the domain - so now the domain Sellervision.com is a (very crude) holding page for our brand. 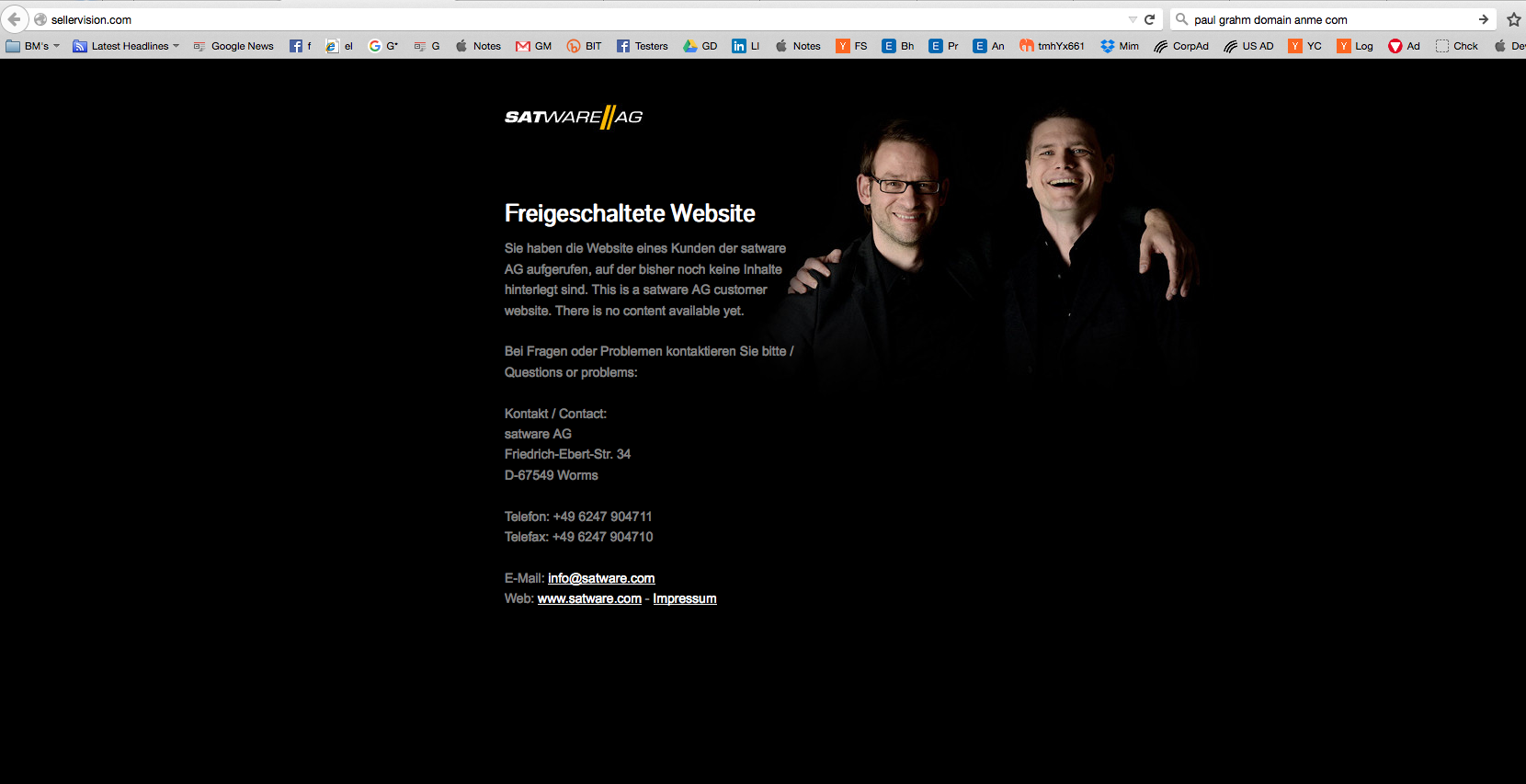 UPDATE 2: I decided that it might be incredibly exciting to use the famous Chucklevision theme tune (http://bit.ly/Chucklevision) for Sellervision, replacing the word ‘Chucklevision’ with ’Sellervision’. So, I looked into the copyright and found the tune was created by a super-talented guy called Dave Cooke: http://www.davecooke.com/kids/ - and he's listed as the composer on Wikipedia too: https://en.wikipedia.org/wiki/ChuckleVision. When I eventually tracked Dave down, he was such a great chap and we agreed a deal where Sellervision could now use the original melody. What a result! And so...I found a talented singer on Fiverr and you can now hear the very first Sellervision jingle at the end of the video above. To me, to you!

An app that bills itself as ‘eBay meets YouTube’ is aiming to take on established giants like Craigslist, Etsy and Amazon. ‘Sellervision’, which allows anyone to buy or sell any product or service using a video shot on a phone, is launched today on iOs.

The app’s CEO, London entrepreneur Sheridan Simove, says the idea for the app was born from the problems he encountered selling online.

“I built the app after getting frustrated with the time it takes to list anything on eBay, Amazon or Etsy. It’s such a chore, even using their mobile apps. I saw an opportunity to fix this and offer a better service to people who wanted to sell anything – be it a product or a service. With Sellervision, you simply use your phone to shoot a short video, fill out a few details and you’re immediately selling. Plus, eBay is far too expensive too - our fees are half theirs...”

In a cheeky homage to the history of the first item sold on eBay (a broken laser pointer), Simove listed his own laser pointer as the first official item on Sellervision. His pointer wasn’t broken, so in order to make the homage pure, he can be seen breaking it during his Sellervision video listing. You can view Shed’s launch video here: https://youtu.be/6CjqskUf2Fk or and view a demo of the app here: http://youtu.be/lmmiU39qO9M. (A broken laser pointer was the very first item listed on eBay when it launched in 1995. When it sold for $14.83, astonished eBay founder Pierre Omidyar was convinced he had a viable business).

As well as claiming to offer a faster listing experience, Sellervision competes with the established online selling stores on price too. Ebay currently takes 10% of a sale price, plus Paypal fees, whilst Sellervision charges sellers exactly half that - 5% plus PayPal fees.

There won’t be any auctions on the new app, though, as founder Simove explains. “We’re living in a ‘I want it now!’ world, so everything on Sellervision is sold at a fixed price, because people need to be able to make a quick decision and buy an item immediately - or sell one rapidly and make cash fast”.

The entrepreneur says he has many plans for his new app. ‘I’ve got lots of exciting ideas up my sleeve that I hope the members of Sellervision will adore. For example, I’m going to sell some Sellervision stock on the app itself and price it incredibly cheaply…so if you keep an eye out for that listing, you could snap up a piece of a growing company for a rock bottom price…’.

He says the app is a natural amalgamation of his past: “My first career was in Television for fifteen years (working as a Producer and Commissioning Editor on shows such as ‘Big Breakfast’, ‘Space Cadets’ and ‘Big Brother’) and after moving into the gift market, I’ve now created and sold over 1.5 million products around the world. So, Sellervision is the perfect mix of my expertise in both areas – entertainment and selling.”.

Simove also plans to take his app to Silicon Valley with the aim of growing his team and raising investment. He spent the last two years applying for residency in the States and was recently granted a Green Card for having ‘extraordinary ability’. Simove explains: “Once I get an idea into my head, I go all out to make it happen… And right now, internet video is the most popular medium around, with many Americans spending around five hours a day watching videos through their phones or tablets. So, with Sellervision, I’ve aimed to create a platform where anyone can instantly become a shopping channel presenter by creating their own thirty second infomercial. It’s less QVC and more ‘YouVC’…”.

Simove has also just negotiated a deal to be able to use the melody from the Chuckle Brothers series Chucklevision (https://youtu.be/FXCi2-6Wwo8) for Sellervision... The creator Dave Cooke (information here: http://www.davecooke.com/kids/ & https://en.wikipedia.org/wiki/ChuckleVision) granted the usage after Simove thought the Chucklevision theme tune would make a catchy jingle for Sellervision.